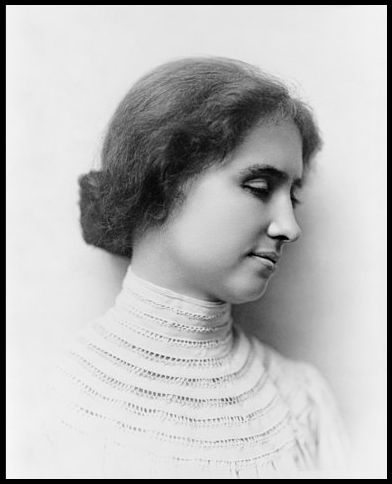 Job 1:21 and said: “Naked I came from my mother’s womb, and naked I will depart. The Lord gave, and the Lord has taken away; may the name of the Lord be praised.”

Helen Adams Keller, who lived from June 27, 1880 to June 1, 1968, was an American author, political activist, and lecturer. She was the first deaf-blind person to earn a Bachelor of Arts degree. The story of how Keller’s teacher, Anne Sullivan, broke through the isolation imposed by a near complete lack of language, allowing the girl to blossom as she learned to communicate, has become widely known through the dramatic depictions of the play and film The Miracle Worker. She learned to “hear” people’s speech by reading their lips with her hands—her sense of touch had become extremely subtle. She became proficient at using braille and reading sign language with her hands as well.

In 1890, Keller began speech classes at the Horace Mann School for the Deaf in Boston. She would toil for 25 years to learn to speak so that others could understand her. From 1894 to 1896, she attended the Wright-Humason School for the Deaf in New York City. There, she worked on improving her communication skills and studied regular academic subjects. Around this time, Keller became determined to attend college. In 1896, she attended the Cambridge School for Young Ladies, a preparatory school for women.  In 1946, Keller was appointed counselor of international relations for the American Foundation of Overseas Blind. Between 1946 and 1957, she traveled to 35 countries on five continents.

It is hard to imagine a tougher life of suffering than to be born both deaf and blind. Hellen Keller looked at life in the proper way:

Helen Keller stated: “Although the world is full of suffering, it is also full of the overcoming of it. Character cannot be developed in ease and quiet. Only through experience of trial and suffering can the soul be strengthened, ambition inspired, and success achieved.

Job had wealth, status, a large family, and land. He faithfully served the Lord and even during incredible suffering, Job remained faithful. His wife told Job to curse God and die. His friends, instead of comforting Job, accused him of sinning against God. The Lord remained the one constant through Job’s trials. Even when he could not understand Yahweh’s actions or sense His presence, Job endured.

The writer of Ecclesiastes also understood that the Lord gives and takes away.

There are seasons in life when we are on the mountain tops and times when we are in the valleys. Hellen Keller knew suffering her entire life but she did not let her problems master her or control her destiny. No matter what season of life you are in, the Good Shepherd guides and loves you. For God so loved you, that he sent Jesus to live a perfect life, die a cruel death, rise from the grave, and ascend to the Father in glory.

Charles Spurgeon remarked in his sermon A Happy Christian:

The worldly blesses God while he gives him plenty, but the Christian blesses him when he smites him: he believes him to be too wise to err and too good to be unkind; he trusts him where he cannot trace him, looks up to him in the darkest hour, and believes that all is well. (Suprgon, Charles H. A Happy Christian. MTP 13:103)

Father,  We so often do not understand our suffering but we praise you regardless of our circumstances. May we have the faith to realize that You are greater than any problems we will experience. May we realize that You know our future and that You will create a new heavens and a new earth. In the precious name of Jesus we pray, amen.