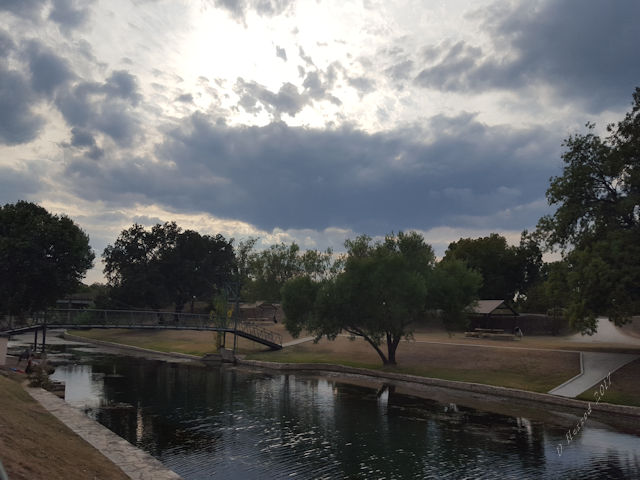 7 When a Samaritan woman came to draw water, Jesus said to her, “Will you give me a drink?” 8 (His disciples had gone into the town to buy food.)

10 Jesus answered her, “If you knew the gift of God and who it is that asks you for a drink, you would have asked him and he would have given you living water.”

11 “Sir,” the woman said, “you have nothing to draw with and the well is deep. Where can you get this living water? 12 Are you greater than our father Jacob, who gave us the well and drank from it himself, as did also his sons and his livestock?”

Lampasas, Texas has long been associated with the local mineral springs. According to the Texas Historical Commission, “Early Indian tribes made yearly pilgrimages to the Hancock mineral springs at the site; it is believed that the springs were discovered in 1721 by the Aguayo expedition on its way to East Texas and in 1735 by a Spanish inspection mission from San Antonio.

In November 1853, Moses Hughes, his ailing wife, Moses’s brother Nimrod, and his family arrived at Hancock Springs, later known as Gooch Springs. Hughes built a mill on the north bank of Sulphur Creek, a log home in 1856, and later a cotton gin. News of Hannah’s cure by the spring waters drew others who lived temporarily in tents and wagons along Sulphur Creek.” (Texas State Historical Association)

People have sought after spring water in Florida, Iceland, Texas, and other regions throughout the world. Especially in desert areas, access to water could mean the difference between life and death. Companies make billions of dollars selling bottled water, distilled water, enhanced water, filtered water, fitness water, flavored water, and sparkling water. Of course, anyone who drinks even the most expensive water will eventually thirst.

Jesus broke down cultural barriers and made a radical claim. He spoke to a Samaritan woman. Jews looked down upon Samaritans. The Samaritans held only the first five biblical books (Pentateuch) to be inspired and believed that Mount Gerizim in the north was as the only holy place for sacrifice. Many travelers would completely avoid Samaritans and walk around their territory. The Samaritans lived north of Judea and south of Galilee. Jesus’ attitude toward the despised group radically differed from other Jews.  (Baker Encyclopedia of the Bible, 1887)

Not only did Jesus have a different attitude, he made a radical claim. He offered living water to everyone who believed in Him. They would no longer thirst. She thought the Messiah spoke to her about physical water, but He spoke metaphorically. Jesus often taught great truth using objects from everyday life.

5 He who was seated on the throne said, “I am making everything new!” Then he said, “Write this down, for these words are trustworthy and true.”   6 He said to me: “It is done. I am the Alpha and the Omega, the Beginning and the End. To the thirsty I will give water without cost from the spring of the water of life. 7 Those who are victorious will inherit all this, and I will be their God and they will be my children. Revelation 21: 5-7  New International Version

Jesus’ teaching on living water will ultimately be fulfilled in eternity. All who trust in Jesus will be victorious and live forever with Him as part of the Lord’s family. Spring and well water remain vital to us in this life; however, only the Good Shepherd can lead us to the green pastures and His father’s banqueting table (Psalm 23) in eternity.

Jesus answered, “I am the way and the truth and the life. No one comes to the Father except through me. John 14:6  New International Version

Prayer:  Father, we praise you for sending us the living water for our souls. We trust in the Good Shepherd to lead us home. We glorify you for adopting us as beloved children and ensuring that we will never thirst again. In the mighty name of Jesus, amen.