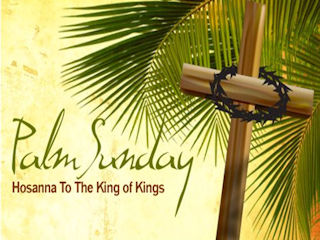 28 After Jesus had said this, he went on ahead, going up to Jerusalem. 29 As he approached Bethphage and Bethany at the hill called the Mount of Olives, he sent two of his disciples, saying to them, 30 “Go to the village ahead of you, and as you enter it, you will find a colt tied there, which no one has ever ridden. Untie it and bring it here. 31 If anyone asks you, ‘Why are you untying it?’ say, ‘The Lord needs it.’”

37 When he came near the place where the road goes down the Mount of Olives, the whole crowd of disciples began joyfully to praise God in loud voices for all the miracles they had seen:

38 “Blessed is the king who comes in the name of the Lord!”

“Peace in heaven and glory in the highest!”

Palm Sunday is the start of the Holy Week:

Osheta Moore wrote one of the best explanations I have seen for Jesus’ triumphal entry:

“Palm Sunday is the occasion on the Christian calendar when we commemorate Jesus’ triumphal entry in Jerusalem. The concept of a triumph requires some explanation, because it’s foreign to modern believers. A triumph was a ceremonial and celebratory procession through the streets of a city. When the Romans wanted to celebrate their latest conquest, they celebrated with a triumph. In fact, in 70 CE the Roman general Titus destroyed the city into which Jesus entered that first Palm Sunday. Titus’s triumph, with the spoils from the Jerusalem temple, is depicted on a monument that remains in Rome to this day. That first Palm Sunday, Jesus wasn’t the only person leading a procession into Jerusalem. There was another one coming from the opposite side of the city.

Pontius Pilate entered Jerusalem from his home in Caesarea. His procession was in the Roman style—complete with a terrifying display of Rome’s military might. Pilate was perched atop a majestic stallion, and he had all the trappings of Roman wealth and prestige. His procession was a proclamation of his and Rome’s superiority. And it came with an undeniable message directed to the pilgrims who had gathered in the city from near and far for the Passover festivities: “Keep the peace, or we will control you by force!”

Jesus’ entered Jerusalem in a humble manner, not on a Majestic stallion but on a colt, a young male donkey. Jesus comes in peace to ultimately die in our place on the cross, rise again from the tomb, and ascend into heaven in glory. Jesus is the Suffering Servant mentioned in Isaiah. He is the Lamb of God slain so that we may join the family of God.

The Romans conquered, enslaved, unfairly taxed, and dominated everyone they encountered. The Roman Empire remains one of the most impressive empires in world history. They led by fear and intimidation, and their legions comprised the most powerful military the world had ever seen.

Jesus demonstrated humility. He modeled it for us as disciples to follow.

Corrie ten Boom was once asked if it were difficult for her to remain humble. Her reply was simple. “When Jesus rode into Jerusalem on Palm Sunday on the back of a donkey, and everyone was waving palm branches and throwing garments onto the road, and singing praises, do you think that for one moment it ever entered the head of that donkey that any of that was for him?” She continued, “If I can be the donkey on which Jesus Christ rides in his glory, I give him all the praise and all the honor.”

Each day during Holy Week we have devotional.

Be humble. Love Jesus and others.
May the Lord’s face shine upon you,